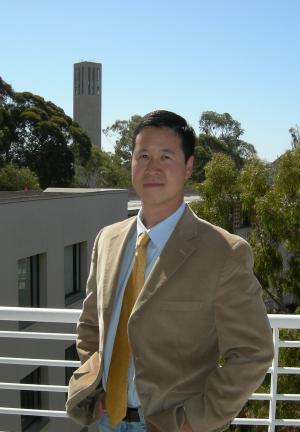 John S.W. Park is Professor of Asian American Studies and an affiliated faculty member in Sociology. Prior to his appointment at UCSB, he was an Assistant Professor of American Studies and Asian American Studies at the University of Texas at Austin. He completed his doctorate in Jurisprudence and Social Policy at Boalt Hall, the School of Law at the University of California at Berkeley. He has a Master’s degree in Public Policy from the Kennedy School of Government at Harvard, and he graduated summa from Berkeley with a degree in Rhetoric. He worked for a year at an immigration law firm in San Francisco before completing his Ph.D. in 2000. From 2007 to 2011, he served as an Associate Dean for Undergraduate Education in the College of Letters and Science.  From 2011 to the present, he has served as the Associate Director for the UC Center for New Racial Studies.  From 2013 to 2016, he was the Chair of the Department of Asian American Studies.

Professor Park writes and teaches on topics in race theory, immigration law and policy, and Anglo-American legal and political theory. In 2004, he published Elusive Citizenship, a book with NYU Press on the philosophical and legal justifications for federal immigration law, as well as the law’s subsequent impact on Asian Americans. In 2005, he co-authored Probationary Americans, a book about contemporary immigration rules and American race theory, with his older brother, Edward Park, the Director of the Asian Pacific American Studies Program at Loyola Marymount University in Los Angeles.  In 2013, Temple University Press published his third book, Illegal Migrations and the Huckleberry Finn Problem; in 2014, the Association of College and Research Libraries selected this book as an Outstanding Academic Title, one of nine books in Political Theory that were chosen, and "bringing with it the extraordinary recognition of the academic library community."  He is currrently working on two books--one about the Immigration Act of 1965 and its consequences, under contract with Polity Press, and then another about young people coming into an awareness of their own unlawful status in American law and society, under contract with the Russell Sage Foundation Press.

Professor Park has published articles and reviews in a wide range of scholarly journals, and he has contributed regularly to the The Law and Politics Book Review and to edited volumes on race, immigration, and Asian American Studies. He has served on the Editorial Board of The Law and Society Review, and he has reviewed manuscripts for the Journal of Asian American Studies.

In addition to teaching, he has advised many, many students over the years, and for a fun set of essays about college, picking a major, graduate school, and other advising matters, please click here. In 2011, his colleagues in the Division of Student Affairs at UCSB awarded him the Margaret T. Getman Service to Students Award.  Since 2015, he has been the President of the Phi Beta Kappa chapter at UCSB.  He has served many years on the Academic Senate's Committee for Admissions, Enrollment, and Relations with Schools (CAERS).

Professor Park is married to Gowan Lee, and they have three children, Zoe, Isabel, and Sophie. When he had free time, he used to fish (with Edward), watch lots of movies, and read lots of books, mostly on Greek and Roman history, European history and philosophy, and East Asian history and philosophy. Now he mostly hangs out with Gowan and the kids.