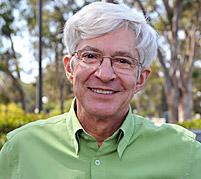 Dr. John Baldwin earned his Ph.D. from the Johns Hopkins University in Baltimore, Maryland, in 1967. He has been at the Department of Sociology at UCSB, from 1967 to present.

He has written numerous scholarly articles—along with several books. His first book, Behavior Principles in Everyday Life (a book about social learning theory), is now in its 4th edition. He has two books that present the work of George Herbert Mead, one of the founders of American Pragmatism: The first is  George Herbert Mead: A Unifying Theory for Sociology (showing how Mead linked together virtually all the major areas of sociology), and the second is "Ending the Science Wars" (showing how we can avoid such wars and move on to more productive studies). Another of his early books is Beyond Sociobiology (showing how to apply learning theory to the study of primate behavior as seen in natural environments).

John and his wife Janice have published numerous articles about sexuality and they are now coauthoring a book titled, Discovering Human Sexuality, along with the well-known scientist Dr. Simon LeVay.

Their website, SexInfoOnline.com, is continually expanding, presenting scientific information about human sexuality to readers in about 180 nations.

152A:  Sociology of Human Sexuality

152B:  Topics in Human Sexuality

152C:  Advanced Study in the Sociology of Human Sexuality